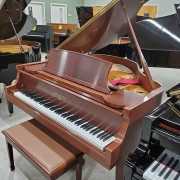 Sohmer & Co., Inc., was established in the eastern US in 1872 by Hugo Sohmer and K. Kuder. Although the company has changed hands several times in the past ~140  years, it is still considered one of the leading piano manufacturers in the world. In particular, Sohmer is known for:

Sohmer pianos have been produced by several companies throughout the brand’s history, mostly in the US, as detailed below: 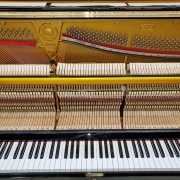 Keep your piano looking and performing beautifully for years to come with our piano maintenance and piano cleaning tips!

If you have any questions about caring for your piano that we haven’t addressed here, feel free to contact us for additional guidance.

Piano Man Superstore is a family-owned and operated small business that’s been serving the DMV and delivering pianos across the US for 45 years. We have a 30,000+ sq. ft. piano warehouse in College Park, MD, where we sell reconditioned pianos that look, sound and perform like new. Additionally, we operate a piano shop where our skilled technicians rebuild fire- and water-damaged pianos, restore antique pianos and recondition used pianos for sale in our showrooms. Our current inventory includes over 130 upright pianos and grand pianos of all sizes that cost roughly half what new pianos do, plus each one is backed by a 10-year warranty on parts and labor and comes with free delivery and a free in-home tuning. Stop by today and explore our selection!